The weight of a rail per length is an important factor in determining rails strength and hence axleloads and speeds.

Weights are measured in pounds per yard or kilograms per metre; the pounds-per-yard figure is almost exactly double the kilograms-per-metre figure. Rails are made in a large number of different sizes. Some common European rail sizes include:

Flat bottomed rail is the dominant rail profile in worldwide use. Vignoles rail is the popular name of the flat-bottomed rail, recognising engineer Charles Vignoles who introduced it to Britain. 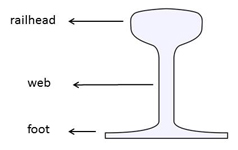 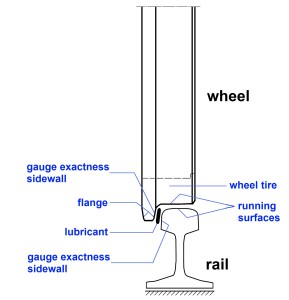 – Blooms made from basic oxygen steel or electric arc furnace steel that has been secondary ladle arc refined, vacuum degassed and continuously cast, shall be used for the manufacture of rails.

– Continuous casting blooms shall be used for the manufacture of rails.

– The manufacturer shall operate a procedure for the effective removal of scale during the rolling process.

– The cross-sectional area of the rail shall not exceed one ninth that of the bloom from which the rail is rolled.

– Rail straightening shall be by a two stage roller straightening process which straightens the rail about its XX and YY axes as defined in the rail profiles shown. End deviations or a localized deviation on the rail may be corrected using pressing.

Where a rail is laid in a Road surface (pavement) or within grassed surfaces, there has to be accommodation for the flange. This is provided by a slot called the flangeway. 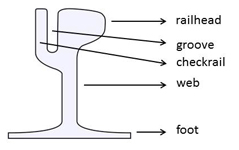 The rail is then known as grooved rail, groove rail, or girder rail. The flangeway has the railhead on one side and the guard on the other. The guard carries no weight, but may act as a checkrail. 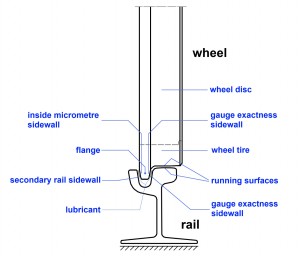