In mechanics terms, a bogie is a frame work which carrying wheels attached to coaches. The bogie, or truck as it is called in the US, comes in many shapes and sizes but it is in its most developed form as the motor bogie of an electric or diesel locomotive or an EMU.  Here it has to carry the motors, brakes and suspension systems all within a tight envelope.  It is subjected to severe stresses and shocks and may have to run at over 300 km/h in a high speed application. 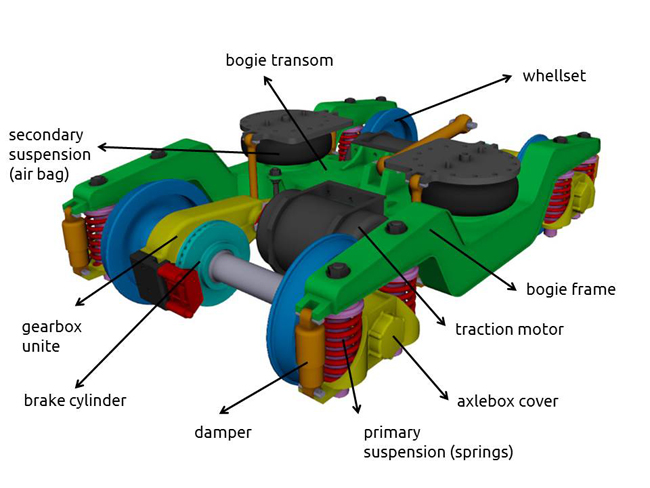 Can be of steel plate or cast steel.  In this case, it is a modern design of welded steel box format where the structure is formed into hollow sections of the required shape.

Transverse structural member of bogie frame (usually two off) which also supports the carbody guidance parts and the traction motors.

A steel coil spring, two of which are fitted to each axlebox in this design.  They carry the weight of the bogie frame and anything attached to it.

This contains the pinion and gearwheel which connects the drive from the armature to the axle.

Normally, each axle has its own motor.  It drives the axle through the gearbox.  Some designs, particularly on tramcars, use a motor to drive two axles

Rubber air suspension bags are provided as the secondary suspension system for most modern trains.  The air is supplied from the train’s compressed air system.

Where a Wheel Slide Protection (WSP) system is fitted, axleboxes are fitted with speed sensors.  These are connected by means of a cable attached to the WSP box cover on the axle end.

To reduce the effects of vibration occurring as a result of the wheel/rail interface.

Simple protection for the return current brush, if fitted, and the axle bearing lubrication.