A railway platform is a section of pathway, alongside rail tracks at a railway station, metro station or tram stop, at which passengers may board or alight from trains or trams. Almost all rail stations have some form of platform, with larger stations having mult     iple platforms.

The term “railway platform” can also mean any type of freight platform beside a rail siding for loading/unloading freight to/from rail cars. 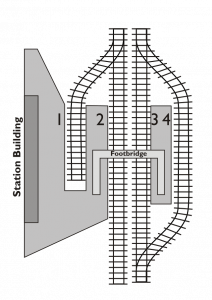 This diagram illustrates different types of platform. Platform 1 is a “bay” platform, while platforms 2, 3 and 4 are “through” platforms. The platform accommodating 3 and 4 is an “island” platform.

An island platform (also center platform, centre platform) is a station layout arrangement where a single platform is positioned between two tracks within a railway station, tram stop or transitway interchange. Island platforms are popular on twin-track routes and can provide for services in both directions from a single platform requiring only one set of supporting services (toilets, ticket offices, kiosks). They are also useful within larger stations where local and express services for the same direction of travel can be provided from opposite sides of the same platform thereby simplifying transfers between the two. An alternative arrangement is to position side platforms on either side of the tracks.

Island platforms are popular in the modern railway world for several reasons. Island platforms allow facilities such as escalators, elevators, shops, toilets and waiting rooms to be shared between both tracks rather than being duplicated or present only on one side. On commuter raillines, passengers tend to use trains in one direction in the morning and the other direction in the evening. With two side platforms, one platform becomes crowded while the other is deserted. An island platform prevents this as the same large platform is used for trains travelling in either direction. This also reduces the cost of maintenance, because rather than having to maintain two separate side platforms, railway operators only have to maintain one island platform.

Passenger convenience is another significant consideration. Generally, even able-bodied passengers dislike climbing steps to pass between platforms, and in some areas subways (i.e. pedestrian walkways) under the railway line may also pose vandalism and security problems. A growing consideration is the requirement for wheelchair accessible stations. An island platform makes it easier for wheelchair users and the infirm to change services, but it means that on a station at ground level, it is impossible to reach the platform without using a bridge, underpass, or track crossing. On the other hand, island platform subway stations allow passengers to use any station entrance, and it eliminates the need for some signage, as well as eliminating the need to construct a crossover or crossunder between two platforms.

In some situations a single side platform can be served by multiple vehicles simultaneously with ascissors crossing provided to allow access mid-way along its length.

Most stations with two side platforms have an ‘Up’ platform which is used by trains heading towards the primary destination of the line, with the other platform being the ‘Down’ platform which takes trains heading the opposite way. Normally, the main facilities of the station are located on the ‘Up’ platform with the other platform accessed from a footbridge, subway or a track crossing. However, in many cases the station’s main buildings are located on whichever side faces the town or village the station serves.

Larger stations may have two side platforms with several island platforms in between.

A split platform is a station that has a platform for each track, split onto two or more levels. This configuration allows a narrower station plan (or footprint) horizontally, at the expense of a deeper (or higher) vertical elevation, because sets of tracks and platforms are stacked above each other. Where two rails lines cross or run parallel for a time, split platforms are sometimes used in a hybrid arrangement that allows for convenient cross-platform interchange between trains running in the same general direction.